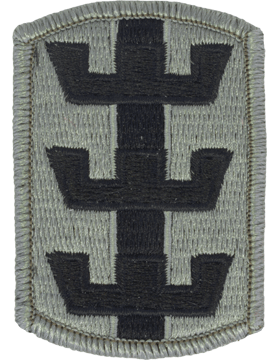 The brigade traces its lineage back to an engineering regiment active during World War II, but the brigade itself did not see action until the mid-1990s. As a part of the V Corps for most of the Cold War, the brigade was stationed in western Europe for decades as a deterrent to a possible Soviet invasion. It finally saw action during Operation Joint Endeavor, providing bridging assistance for the international force in the Bosniaregion. Several years later, the brigade was the primary engineering component during the invasion of Iraq in 2003. With numerous difficulties, the brigade was forced to take on several unexpected missions during its year in Iraq. It saw a second tour in 2005 and a third in 2009 in which it once again was the primary engineering component in the country. The brigade deployed to Afghanistan as the Theater Engineer Brigade in support of Operation Enduring Freedom from 2013-2014.

The brigade had a long history of supporting V Corps of United States Army Europe from 1969 until 2007, during which it was based at Warner Barracks in the Bavarian town of Bamberg, Germany. That ended when the brigade was relocated to Hawaii to support United States Army Pacific as part of a major restructuring plan of the US Army. Reactivated in 2008, the brigade is currently at home in Hawaii.