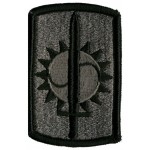 The 8th Military Police Brigade is a military police brigade of the United States Army based at Schofield Barracks, Hawaii. It is responsible for military police units in the Pacific Ocean region.

Activated during the Vietnam War, the 8th Military Police Brigade was specifically organized to provide planning, direction and supervision for the criminal investigation work required by the U.S. Army in Vietnam. It took over from a provisional Military Police Group (Criminal Investigation) that had been formed on 3 November 1966 in charge of all criminal investigative work in Vietnam, except for the metropolitan Saigon area.

In July 1972, it became the basis for the U.S. Army Criminal Investigation Center, Vietnam Field Office. It served in the region for several years and earning ten campaign streamers before being deactivated during the American forces pullout from the region. The brigade was reactivated in Korea in the 1980s to provide command and control for all U.S. Pacific military police forces, and has since been moved to Hawaii, where much of U.S. Army Pacific is located