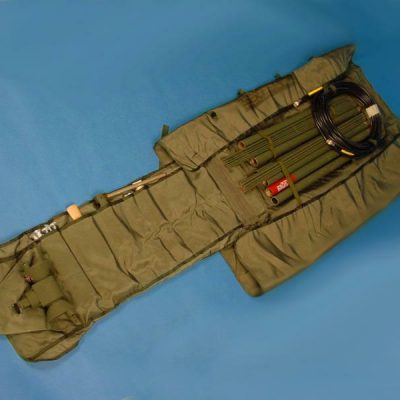 The OE-254/GRC Antenna Group is designed for broadband omni-directional ground-based communications. It is intended for use with all ASIP and SINCGARS Radio Sets including AN/VRC-87, 88, 89, 90, 91, and 92, as well as Radio Sets AN/VRC-12, AN/VRC-43 through AN/VRC-49, AN/VRC-53, AN/VRC-64, AN/GRC-125, and AN/GRC-160 but will also function with the AN/PRC-25 and AN/PRC-77 Radio Sets. The antenna group is produced to Military Specification MIL-A-49204 and can withstand 90 mph winds without ice coating and 60 mph winds with 0.5 in of radial ice coating the entire antenna, and remain erect and operational. The antenna group is stowed in a transit bag and spare antenna elements, guy assemblies, guy plates, and stake assembly are included. Artwork detailing assembly and erection procedures and stowing instructions are sewed integral with the bag. The Antenna Group OE-254/GRC is designed for use in all climates and terrains. Not our stock photo.