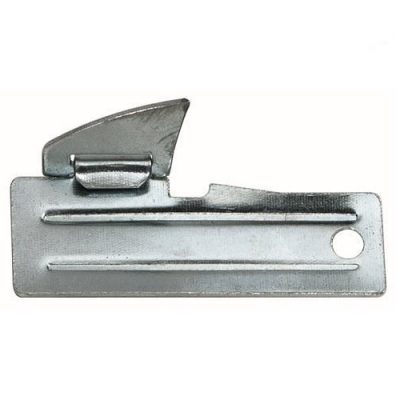 The P-38 Military Can Opener is known by some as the “Army’s Greatest Invention”. Our P38 Can Openers are new, not surplus. They are stamped from cold rolled steel right here in the United States.

A P-38 will work on any size can rim. When the power is out or your electric can opener bites the dust, a P-38 Can Opener will save the day. Originally manufactured for soldiers in the field to open their canned rations, the US P-38 is durable, high quality and has developed a history of its own through numerous wars and military operations.

Don’t get caught in a thunderstorm, hurricane or ice storm without a working can opener. The US P-38 and P-51 Can Openers are perfect for camping, hiking, fishing or for the survivalist in your family. Be sure to carry a P-38 on your key ring, dog tag chain, tackle box or in your emergency survival kit.

The P-51 is the larger version of the P-38 and was often used by mess hall cooks to open the big trays and large cans of chow. The P-51 is a full 2″ long. The added length affords more leverage and doesn’t require as much thumb pressure to use. Some prefer them over the P-38s because a P-51 will open cans much easier and faster and will last much longer than the P-38. We recommend having one in every car, on every key-ring and included in every emergency survival kit.

During the WWII, Korean and Vietnam Wars when hungry GI’s were ready to dive into their delicious meals of K or C-Rations they used their trusty P-38s to open the cans. No it wasn’t the famous WWII fighter plane or a German pistol, it was an amazingly simple little piece of 1-1/2 inch stamped metal that was developed in just 30 days during the Summer of 1942 by the Subsistence Research Laboratory in Chicago.

It’s official designation is ‘US ARMY POCKET CAN OPENER’ or ‘OPENER, CAN, HAND, FOLDING, TYPE I’, but it is more commonly know by its nickname, the P-38, which it supposedly acquired from the 38 Punctures required to open a C-Ration can. It is also known by many as a “John Wayne” by those in the Navy and Marines because he was shown opening a can of C-Rations using a P-38 in a WWII training film. From then on Sailors and Marines referred to them as a “John Wayne”.

Originally, P-38s came wrapped in brown kraft paper packets with a diagram and directions printed on it. About a dozen P-38s came in a case of C-Rations. Eventually, because everyone was hoarding them, only 3 were included in a case. These handy gadgets have adorned the dog tag chains and key rings of WWII, Korean and Vietnam war vets ever since opening their first can of C-rats with one. We have heard that GIs held C-Ration can opening races using P-38s. These were usually won by a GI who could open a C-rat can in less time than it takes to read this sentence. It takes us alot longer.

In an article for ‘The Pentagram’ Army Public Affairs’ Officer Maj. Renita Foster wrote that the P-38 could be the Army’s greatest invention ever and most WWII, Korean and Vietnam era GIs would certainly agree.

Unopened vintage P-38s, in their original paper wrapper, are getting much harder to find so resist the temptation to open one if you find it as the unopened ones are becoming collector’s items. More and more GIs are putting them in their military & medal displays. Even P-38 collections have become very popular lately. P-38 collections don’t cost much and don’t take up very much space. It’s a lot of fun finding the hard to get P-38s.

I’ve had a P-38 on my key-ring, or near by, ever since my Boy Scout camping days when my Scoutmaster introduced us kids to this handy little tool. My Scoutmasters were veterans that knew how handy the little P-38s were.

Recently, P-38s have added a new role to their long list of uses. Shelters and organizations that aid the homeless hand them out and also were included in the humanitarian relief packets dropped into Afghanistan. We have also been told they have been handed out here in the USA by relief organizations after natural disasters (hurricanes, tornadoes, storms and floods) for when the power is out and electric can openers no longer work.

A P-38 Can Opener is a lesson in simplicity at it’s best. We wish everything in life could be as simple, useful and dependable as a P-38.