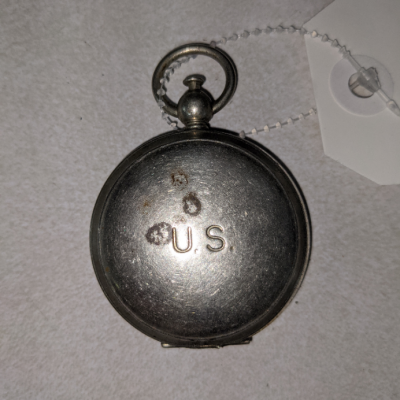 As is. Needs new lens. This product is sold in the condition as shown in the picture.

The Wittnauer company was established by Swiss immigrant Albert Wittnauer and his brothers in New York in 1890, focused on watchmaking.

In 1907, due to their reputation as precise and reliable, Wittnauer watches were used by the U.S. Navy in aviation tests. Wittnauer began to cater to the growing world of scientific and private exploration, and the company’s watches, timepieces and navigational instruments were used by explorers, aviators, navigators, astronomers and the U.S. army.

Wittnauer had a relationship with Longines watches from 1880. In 1936, the two merged and began producing military issue watches for the Second World War.

Watchmakers fleeing Europe at the start of World War II were given jobs manufacturing navigational instruments and other war products at Wittnauer. Due to Wittnauer’s long relationship with the American military, the company was given a contract to produce compasses for the U.S. military forces in 1941. Most of the Wittnauer compasses you see come up for sale were made this year. They were included as part of a survival kit for U.S. aviators, and were frequently seen as Officer’s compasses.